We were on the road at 9:00 a.m. - 11C (52F) although it quickly changed to 17C (63F). It was a nice, sunny day. We had another uneventful trip for which we're very thankful and arrived in Ottawa at Rideau Heights Campsite around 12:45 p.m. It was 23C (74F) on arrival and got up to 25C (77F). Someone was on the site that was reserved for us so we're in the site beside it and it works fine. It's a back in site and Gordon did a great job backing in. The sites are level and fairly spacious and we have a picnic table which we haven't had very much this winter.

We've sure seen a lot of police on the road since about Oklahoma.

The border crossing was a breeze. I had the total receipts ready and he just waved us on. One of the best crossings we've had.

The lineup at the border wasn't bad. 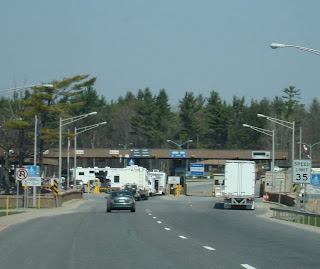 Crossing the last bridge into Ontario. 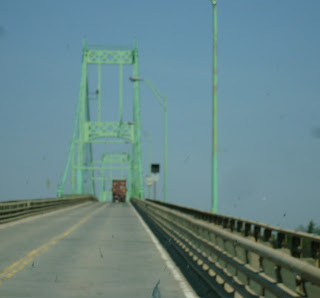 Here's our merge onto Hwy 401 in Ontario to head east. 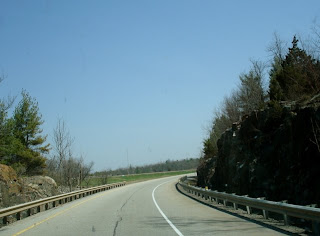 Still some snow in the shady areas along the highway 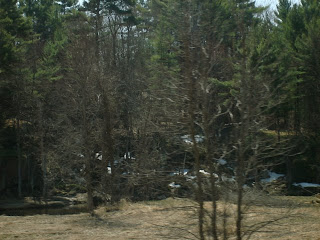 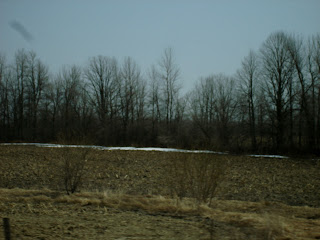 We have a Rockport in Ontario too. 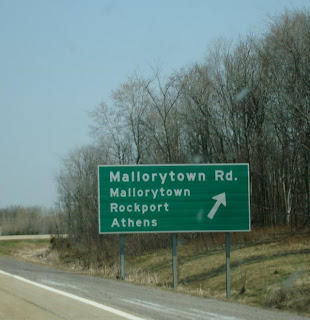 Along Hwy 416 going north toward Ottawa. Still a lot of water around. 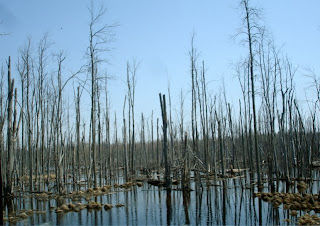 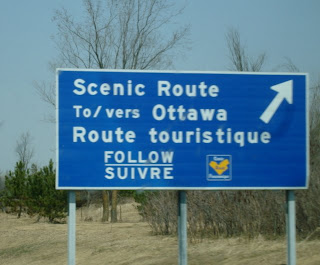 There is still some snow here and there as you can see from the photos. Mostly in shady spots and also where they dump the snow and create huge piles. There's even some snow in the campground and up until yesterday a lot of the sites still had snow in them so we're lucky we just arrived today!

Here are some campground photos. We're backing on the new plant that went up two years ago. Before that it was all bush and brush behind us but at least now it's clear enough that we can see the satellites from this site.
We're here! 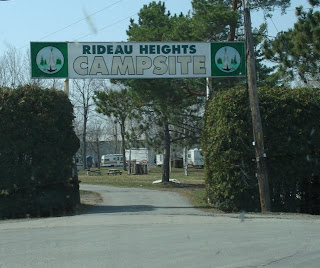 Looking toward the entrance. Our 5er is the third one on the right. 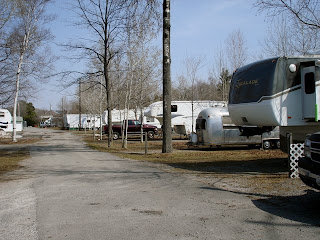 This is our site. Not a very pretty back yard but it will do! 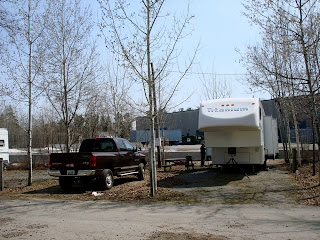 Still some snow in the campground but it's a lot better than it could have been if the temperature hadn't turned warm over the past few days. 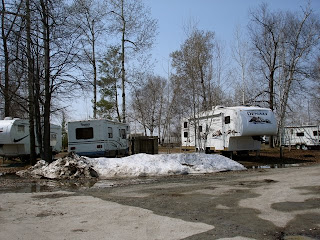 I didn't have enough cash to pay for our site so as soon as we were unhooked I went to the bank and brought back the cash that they like here. We've decided to stay here for two months as we have medical and dental appointments well into the end of May and we still don't know what sort of appointments Gordon will have coming up.

After all that was done, I had a nice shower and as is typical in Ottawa they went directly from winter into summer so I was hot and sweaty from all that rushing around. Traffic in Ottawa hasn't gotten any better since we've been gone and I sure miss being out in the desert where there was very little.

There are lots of nice nature trails around here but unfortunately none that I can walk to from the campground. We just have to get there in between now when it's muddy and when the mosquitoes come out.

I also put a phone call in to the travel medical insurance company to let them know we got home okay. They have sent a package so I'll have to get to my sister's to pick that up and get it in before the hospital starts calling us wanting their money!

However, here we are, home again and I'm feeling good about it!
Posted by A couple of newer paintings 2019 at 3:22 pm