First of all Happy Anniversary to my sister, Betty and brother-in-law, Garth! They were married 10 years ago today in St. Lucia. I'm sure they'll be living it up tonight in Toronto. Here's a photo that I took of them at the cottage in October. 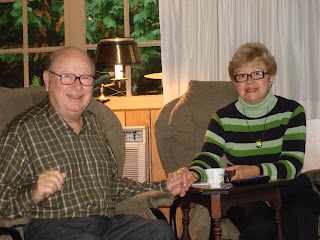 My goal for this year had been to reach 10,000 hits by today on my blog. Since I only set up my blog counter in June of this year I was amazed that I got even close to 10,000 but to hit over 11,500! Thanks to all who have contributed to this and thanks for reading my blog. Just today I've had visitors from Brazil, India, France and Sweden as well as all over Canada and the U.S. I'm averaging over 80 hits a day.

I was up about 1/2 hour early this morning. The radio predicted that we'd reach 70F (21C) today and when I got up it was already 42F (6C) instead of the usual 30F (-1C) that it's been the last little while. We're not out of the cold spell yet however, more to come later this week along with some rain predicted.

Today hit a sunny high of 68F (20C). Late this morning we drove into Scottsdale to Whole Foods so I could get some flax cereal. For some reason the stores don't seem to have it here like they did in Tucson. Even Whole Foods didn't have the exact one I wanted. Our plan today had been to drive to McDowell Mountain Regional Park to check out their campground and see if we want to go there after we leave here on January 10th. I packed a picnic lunch for us.

We saw this house on our way to McDowell. I remember it from last time we were here. Just love it! 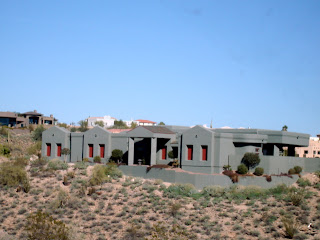 We arrived around noon, drove around one part of the campground then on to the visitor center where we were told there probably won't be a problem getting in on the 10th. None of the Regional Parks take reservations so you takes your chances. We drove to the end of the park and had our picnic lunch amid the palo verdes and cacti with a view of the mountains. 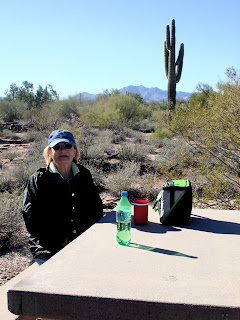 On our way to the picnic area we saw the devastation created by a fire in the park in 1995. 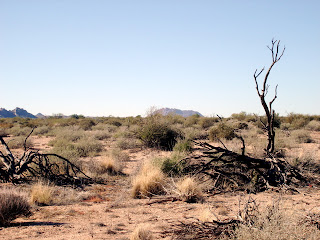 We then stopped at the other campground loop, decided we liked the first one better then set out for home unfortunately going in the wrong direction but did see this upscale neighborhood with nice landscaping along the road. 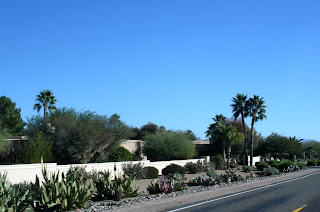 My computer had come along for the ride in case we needed GPS and when we came to the end of the paved roadway decided now was the time to get it out. We got back going the right way and drove home via the back way thinking this is the way we will come on the 10th when we bring the RV back to McDowell Mountain however Gordon hadn't remembered the steep roadway in one part of the Bush Highway so we might decide to go through the city instead.

This is Weaver's Needle as seen from the Bush Highway. 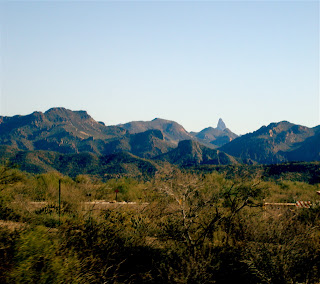 These are the Bulldog Cliffs also seen from the Bush Highway. 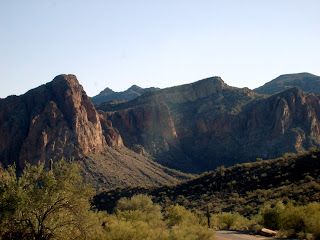 On our way back we stopped at one part of the Bush Highway where there's a cholla forest with the mountains in the background. We had stopped here when we were in Mesa two years ago. 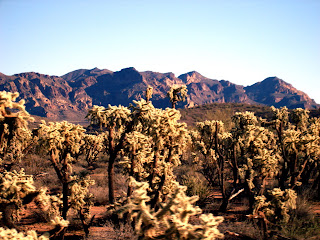 Tonight we are staying at home. We've rarely been ones to go out on New Year's Eve. I'd had enough of that in a previous life to last me a lifetime! So it will be a quiet night at home. I usually stay up till midnight but at 10:00 p.m. it's midnight in the east so I can go to bed then having brought in the New Year in the east. Gordon usually goes to bed at his usual time. I expect I will spend another evening in the chatroom!
Posted by A couple of newer paintings 2019 at 10:57 pm