Seeing Some of the Area

This morning was nice and sunny and 53F (12C) and I did my usual walk along Lone Star and then around the RV park.

It is so sad to hear that 18 one year old whooping cranes were killed in the tornado that hit last week. All 18 had flown with an ultra light plane from in the Fall. To read the story click here.

Late this morning we went out and stopped at the Chamber of Commerce in Rockport to get information on birding spots. Then we started out for one of them, Aransas Woods. It turned out to be a dud for birds. All we saw was one great egret far in the distance. We did however walk about ½ mile through supposed trails with grass and bushes and wet spots so we didn’t stay long. We then took FM1069 which is the road we sometimes take to Bayside and where we’ve seen sandhill cranes before. The birding hot spots map showed some roads that run off of FM1069 and the first one we took we did see sandhill cranes, but only three of them. We took another road and saw some other birds but most of them too far especially for my camera. 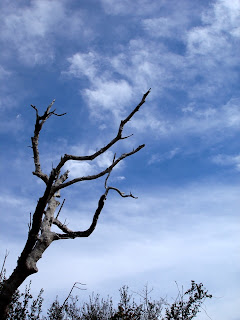 On our way back we stopped at Camping Clinic and they received our microwave today but can’t put it in until later this week. He’s supposed to call us.

We took the part of the way back and saw lots more birds especially at Little Bay which is within the city limits. We stopped at Fulton Mansion as well which was the home of the man that the town of (where we are now) is named after but it’s closed on Monday and Tuesday. So our final stop was at a little fruit market along the highway where I got some oranges. Prices of oranges in my opinion is way too high. They are cheaper at home! HEB wanted $1.99/lb for naval oranges last week so I didn’t buy any. The guy at the fruit market told me navals were out of season but there were still a few in the bin so I bought a few and the price was much better. It cost me $1.34 for 4 oranges. Now we’ll see how they taste. 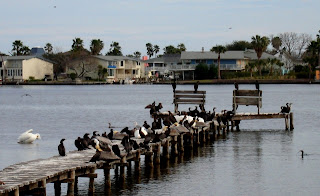 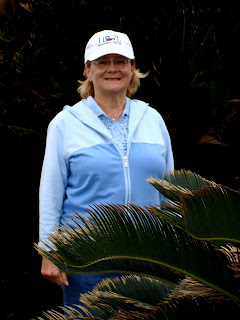 Sandra on the grounds of Fulton Mansion - note my new hat

Our high today was 66F (19C) but after a sunny morning and early afternoon it got cloudy during the later afternoon however there was a sunset that Gordon took some photos of at the bridge at Copano Bay.
Posted by A couple of newer paintings 2019 at 5:28 pm