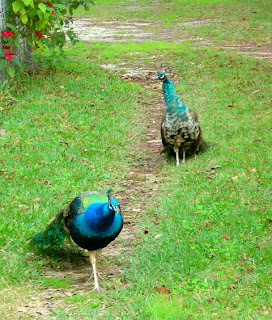 After the birding slide show last night I decided to take my binoculars instead of my radio on my morning walk. It was 49F (9C) and cloudy. We had some rain during the night and it looked like we might get more but I was lucky and didn't get wet. I didn’t see a lot of birds, a few cardinals and what I thought was a blue heron but could be a tri coloured heron or a reddish egret. It’s hard to tell since I only saw his body.

Around noon we hitched up to go and dump our tanks. Break down, dump and set up again took about two hours. After we got set up I vacuumed the RV and had a nice hot shower.

In this area if it’s not sand that’s being tracked into the RV it’s crushed oyster shells. At there are crushed oyster shells all over the place and the area where we are camped is covered with them so we’re always tracking them in even though I put a brush at the door to brush off the soles of our shoes. It just can’t be helped.

Late this afternoon we took a drive to the Fourth Street Pond as that is supposed to be a good place for birds but we were too early. Apparently flocks of birds come in around 5:00 p.m. but there’s no place to park so we drove around the area and did see a new bird. It looked black with a curved bill like an ibis but we have yet to identify it but from the bird book it looks like an immature white faced ibis.

On our way out of the park there are some houses just outside the gates. As we were driving past I saw a flash of blue and thought they were peacocks so we backed up and indeed they were – a male and a female. I expect they are tame as they didn’t seem to be afraid.

We did get some sun this afternoon and were able to be outside without coats. I think our high was 61F (16C).