We Arrived in Quebec City

We left Ottawa Municipal Campground at 8:15 a.m. Sunday morning, crossed the border into at 9:55 a.m. and were through the worst of Montreal around 11:00 a.m. We arrived at Camping Juneau near at about 1:45 p.m. We checked in but it didn’t look like the site she had allotted to us would access the internet so she said she had one down by the lake and we should be able to get internet there as it was south-facing. NOT! This was a tight squeeze and not easy to get into but Gordon did a good job backing into it. He tried to site in the internet satellite but there was no way, just too many trees. We were mostly set up at this point however back to the office we went and told her that we couldn’t get our internet signal so she suggested other sites but the place is surrounded by trees so I asked her if she would refund our money and she said she would. We told her we would stay tonight and look for another campground. It’s really too bad as the view is very pretty from our back window which overlooks Lac St-Augustin. I would say that next to Double M in Lindsay this is the best view we’ve had from right out our back window. 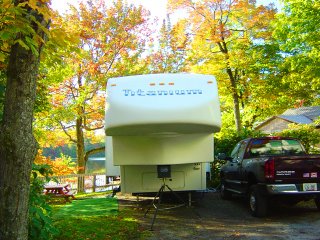 This is our site 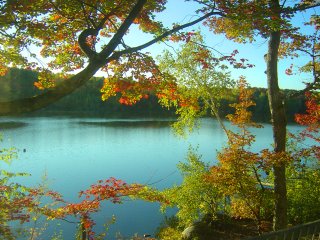 This is our view

One of my internet friends who reads my blog had suggested a campground at Levis, QC so off we went in search of it. We found it and Gordon thinks we shouldn’t have any problem accessing the internet and TV satellites from there. It is quite a ways outside of Levis and the only road across the river is under construction and backed up forever but there is a ferry that runs from downtown Levis to Old Quebec so we’ll probably use that to get across the river while we’re here. We’re scheduled to head to Camping Transit tomorrow.

We drove around Levis and found the ferry terminal but were unable to find any open wifi networks to post our location so everyone will have to wait with baited breath for tomorrow.

So no internet tonight and we’re using the aerial for TV and they don’t get CTV so I miss the season premiere of Desperate Housewives! We get CBC and Global in English only. I’m tired anyway so will probably have an early night. I kept waking up last night every hour as I wanted to get up early so we could get on the road early. I did get up at 6:30 a.m. which is why we got away so early today.
Posted by A couple of newer paintings 2019 at 12:41 pm