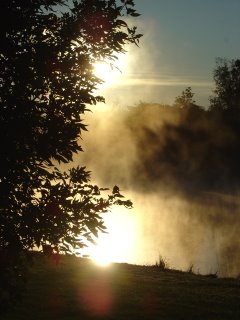 Sunrise on the Scugog River
This morning I was up just after 6:00 a.m. It was 4C (40F)! Gordon had put the furnace on during the night and this morning when I got up the electric heater was on too.

After I took Bib out, I went out to find Gordon as he was out taking sunrise photos. I found him down by the water photographing the mist over the water and waiting for the sun to come up over the trees. I stayed with him and took some photos too. While we were there a flock of wild turkeys came by. We continued down to the beach taking some more photos and then to the boat docking area. There was a heron there yesterday but he wasn’t there this morning.

Last night Bib started coughing, I think from a treat that he swallowed whole. He coughed on and off during the night and this morning appeared listless and didn’t want to do anything. He didn’t eat or drink either so at 9:00 a.m. we took him to the vet up the road from us and he squeezed us in. He thinks Bib scratched his throat so he suggested giving him pepto bismol to soothe it and putting him back on small amounts of canned food feeding him often during the day in small amounts. So more vet bills!

Around 10:30 a.m. the installer came to put up our StarChoice Satellite dish. He was gone by about noon and we had satellite TV. Now we have to find out what channel is what. We have 290+ channels!

After we surfed some channels to see what was what, I had a nap then got up and got ready to go to Betty & Garth’s for dinner. We wound up taking Bib with us as he is eating small meals so I had to feed him again. We arrived around 4:15 p.m. and sat and chatted, went for a walk and had a lovely dinner in the gazebo on the dock. After cleaning up and some more chatting, we left arriving home around 10:00 p.m.