Big Harv Gets a Bath! 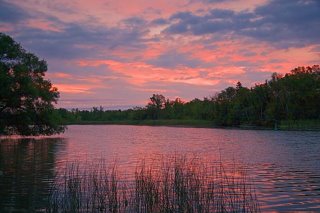 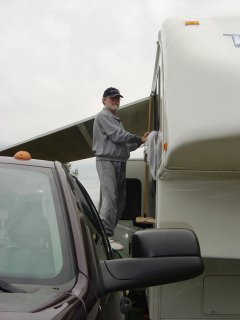 Apparently there was a nice sunrise this morning (photo above taken by Gordon). I wasn’t up yet. By the time I got up it was cloudy and cool with a threat of rain.

That being said, after breakfast this morning we proceeded to wash the RV. The site that we have is perfect as we can pretty much use the truck as a ladder on all sides and there’s no one behind us so we also used it for washing the rear. Our ladder isn’t really tall enough to be able to get any strength behind washing and this time, it really needed strength. It was very dirty, a lot of it from washing the roof on Wednesday but there were also black streaks which are very hard to get off. Gordon did most of it with me running errands. I did do the part under the nose. Photo above shows Gordon using the truck as a ladder. It was actually a good day to wash the RV, it wasn’t too hot and the sun wasn’t shining in our eyes. Gordon got soaked so after we were done, we went down to the campground showers and had long hot showers. Our shower is convenient but it’s nice to be able to let the hot water run instead of taking ‘navy showers’. It never did rain while we were working.

It started to rain late in the afternoon and has been raining steadily all evening.
Posted by A couple of newer paintings 2019 at 8:16 pm