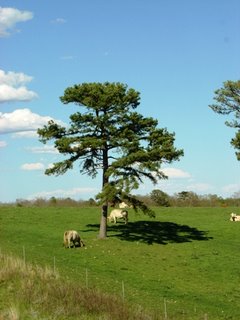 Scene along US65 on the way back from Harrison, Arkansas 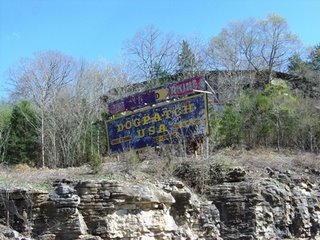 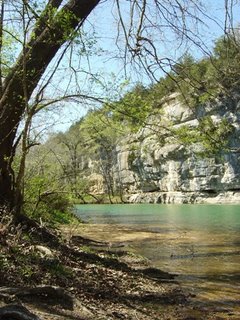 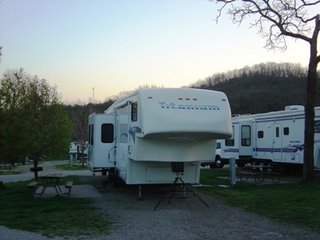 Our site at America's Best Campground, Branson, MO taken at sunrise
We weren’t moving too fast this morning. Last night was rather scary waiting to see if the tornado was going to hit but it didn’t, thank goodness. One went south of us and most of them went north east. Gordon slept in his chair until about 1:30 a.m. and I was on the couch, still dressed just in case we had to make a hasty exit for the clubhouse building.

I finally took a photo of our site this morning just as the sun was coming up and it is shown above. I was out early for our walks as I had a nap yesterday afternoon and then slept all night.

After lunch we headed out for a drive and wound up driving into Arkansas. We stopped at a Tourist Bureau at Harrison and was told to go to the Buffalo National River that the scenery there was very pretty, so we drove there and took a few pictures. On our way there and back we drove through Dogpatch. I took a photo of the sign for fun. Then we drove back on US Route 65 and took some photos along the way. We bypassed Branson coming back and stopped for a few groceries before heading home.

It was 86F and sunny today but tonight it has clouded over and gotten cooler. There is apparently a cold front coming through.
Posted by A couple of newer paintings 2019 at 10:06 pm