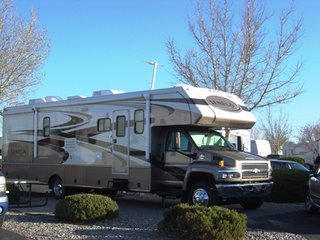 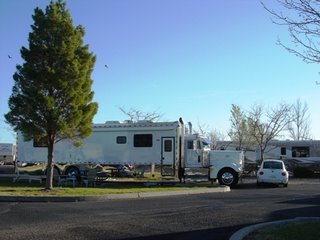 Today was a busy day. Not sure what we did but it seems like I haven’t stopped all day.

After walks this morning, I decided I needed to do laundry. I went to the campground Laundromat but there was no parking so I pulled into an empty spot for RVs across from the laundry. One of the maintenance guys told me I couldn’t park there so I went back to the RV, got my purse, and went out to a real Laundromat. Although it cost in fuel, it was cheaper and the equipment was better.

On my walks around the park in the morning I’m always looking at license plates to see where people are from and also on the lookout for different RVs. Pictured here are a couple that are different. The large C Class we’ve seen before. It’s fairly new and a couple of manufacturers are building them. The Peterbilt cab with the trailer on the back looks custom made. There’s no name on the trailer. Looks like it might be a toy hauler. They have a Volkswagen Beetle.

I came back from getting laundry done, had lunch, read a bit and then we went to the new Camping World which is just across I-40 from us. Gordon has been complaining about our water hose kinking all the time so we got a non-kink water hose. We’ve also been buying water for mostly everything except washing dishes and showering and since it’s so expensive to buy bottled water in , we bought an in line water filter which covers the whole RV rather than putting one under the sink. Our toilet last year turned blue around the rubber ring because of some chemical in their water so hopefully now that won’t happen. Now we just have to decide if we want to replace the ball in the toilet so we have a nice clean ball rather than one with a ring around it. We also got a package of bungee cords which was badly needed.

When we got back I colored my hair which I’ve been putting off for far too long and since we’re headed to places where people know me, I thought I’d better get it done. So that being done, got showered and now I’m sitting here relaxing.

Tonight is my favorite TV night again! Also need to get lots of rest. Our hopes are to get past tomorrow.

All in all it's been a good stay here except for my breathing problems (but that didn't start here, it actually started in Tucson). The park is clean and well maintained, private showers and bathrooms were clean. They even provide continental breakfast every morning although we didn't partake. It's just outside the city, right along I-40 but we're at the back of the park so the noise wasn't bad. Other than that it was close to downtown and Old Town and also to WalMart which is always a plus.

Last night we set the clocks ahead one hour. It's so nice to see the longer days coming!
Posted by A couple of newer paintings 2019 at 7:50 pm