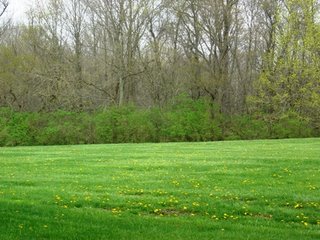 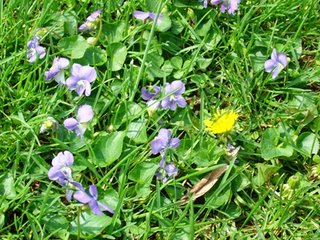 Violets and One Dandelion 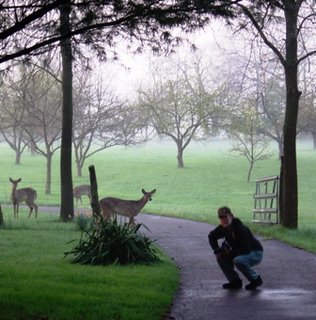 Gordon with the deer 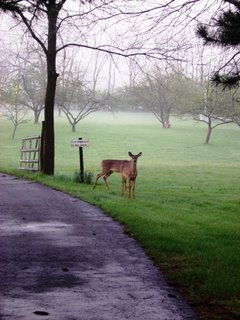 Deer in the morning mist 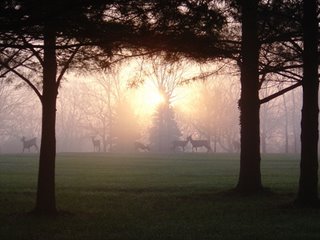 Deer frolicking in morning sunrise
We had a rotating thunderstorm last night that lasted from about 8:00 p.m. to the wee hours of the morning. Consequently poor Bib didn’t go outside until this morning at 7:15 a.m. He’s such a good boy. I thought he’d wake me during the night once the storm was over. At one point there was a tornado warning as well. I really miss the southwest!

I didn’t get much sleep. I went to bed but couldn’t breathe so I got up and did some reading and computering and then lay down on the couch about 2:30 a.m.

This morning when I took Bib out it was very misty and the sun was coming up. There were also six or eight deer that seemed almost tame but with the dog there they weren’t taking any chances. I’ve enclosed some photos of them.

I really enjoy seeing wildlife so close without having to leave the park so I think we’ll probably stick with this park and just try to arrange a better site next time.

Gordon and his sister, Carol went to the Cincinnati Conservatory today to photograph the flowers. I decided I didn’t have the energy so stayed at home with Bib and started to get some of the bills ready to cross the border. It’s a big job but I don’t want to wind up paying through the nose for duty and taxes like we did last year so it needs to be properly organized. I also read and went for a walk around the campground. It’s quite humid here again today.

When Gordon got back we both had a nap and then he got the BBQ out for the first time in a while and cooked up the burgers that I had in the freezer. If meat isn’t in it’s original package, there may be a problem crossing the border and I had the burgers made up and in a freezer bag.

It was a nice evening so we ate outside at the picnic table. That was really nice for a change.

The campground is pretty much full, I guess since it’s Easter weekend so it’s interesting to sit outside and watch what’s happening. The people across from us have a wire haired terrier puppy named Mickey Mouse. He’s so cute and also has no clue as to obedience.

The forecast tonight is for more thunderstorms!
Posted by A couple of newer paintings 2019 at 8:04 pm