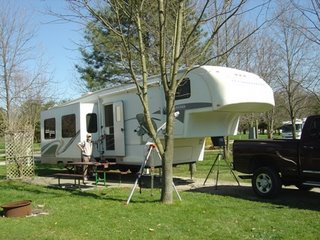 We had another nice day for traveling. We went through Indianapolis around 11:00 a.m. and traffic was fairly good. We arrived at Cincinnati around 1:00 p.m. and traffic on the bypass wasn’t too bad but we didn’t have far to travel.

When I called yesterday for a reservation at the Cedarbrook Campground in Lebanon I was told that they had no pull thrus and I asked for an easy back in. We probably had the worst time backing into our spot here than we have anywhere. The guide who took us to our spot probably should have just left and let us do it on our own. We’ve usually been fairly successful but it took almost an hour, I think to get parked. They have wifi internet here throughout the park thank goodness because the park is surrounded by trees and so far we haven’t been able to get our internet satellite set up. I really hate paying for it when we can’t use it. We’ve been lucky on our travels this year, I think there were only two places where we couldn’t use it, Banff and Chilliwack.

The photo today shows Gordon just coming out of the door of the RV and it shows our internet satellite set up but unfortunately that’s all it is, just set up not working.

We are both wiped out and have lots of mundane things to do like laundry, vacuum and get groceries, but not tonight!
Posted by A couple of newer paintings 2019 at 6:36 pm