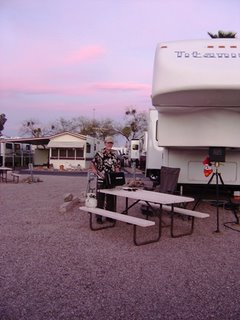 As it turns out the neighbour’s door facing us would have been better. The guy next to us put his sewer hose out as soon as he was parked and just put it in the sewer without a donut (a ring that blocks the sewer gas from coming out) consequently all we got all day was an odour of sewer gas wafting through our windows. We have been keeping the windows open when we’re here instead of using the air conditioning as even though it has gotten up to 89F in the RV, it’s not humid so it’s just warm. The fans circulate the air and it’s great. Anyway, this guy next to us needs a slap upside the head. I had hoped he would leave today but he’s still here.

Anyway, this morning it was 54F when I got up. Yeah! All I needed was a sweater to walk the dog rather than splash pants, two sweaters and a coat. It’s also warmed up to a respectable 83F with a gentle breeze but it’s clouding over and the weather forecast is calling for a 30% chance of rain. It hasn’t rained in 78 days here.

I managed to get the laundry done this morning and this afternoon sat outside and read my book for a while till it clouded over.

Both of us felt kind of icky today, don’t know if its from the smell of sewer gas or not so we just lounged around until after 5:00 p.m. then drove to downtown Tucson and Gordon took some photos of the architecture, mainly doors, I think as I haven’t seen the photos yet. I didn’t take any that are good enough to post so my photo tonight is of Gordon barbequing the night of our arrival with the pink sky from the sunset.

We wound up our drive trying to find a Taco Bell. We eventually found one but there was lots of traffic!

Back home to watch TV which isn’t great since we don’t have cable here!

By the way for those of you that don't know, today is Fat Tuesday (the day before Ash Wednesday) in New Orleans. We call it Shrove Tuesday. Instead of pigging out on pancakes, we pigged out on Taco Bell since Gordon can't eat pancakes unless they are made with gluten free pancake mix.
Posted by A couple of newer paintings 2019 at 10:21 pm