It was raining hard when I went to bed around 11 last night and it continued to rain all night quitting somewhere around 5 a.m. or so. I only slept off and on because of the rain as it was so loud!

It was already 14C (58F) when I got up around 8:30 a.m. with partial sunshine. I did my walk/run down the hill today and around the campground but there was lots of mud and standing water around so between the traffic on the road and the mud and water, it wasn't a pleasant walk.. Enough with the rain! Send it to the Texas coastal bend where they need it for a while. The good news is that we're booked into our favourite campground, Tranquil Acres at Carleton Place starting March 19th! The commute into Ottawa's west end will be sooooo much easier as there's more than one road that we can use.

This morning I read in the paper that Nortel is not doing as well as they had hoped after filing for bankruptcy in January so I went out and got my medical receipts copied and sent in to Sun Life. Don't know how much longer I'll have Extended Health Care. To read the newspaper report, click here.

While out I stopped at our local Giant Tiger to pick up a few things, then at Walmart to see if the nectarines had come in - NO!

After lunch I read for a while while Gordon had a nap and when he got up I got the vacuuming done. I also read about a little trick for keeping the window slider areas clean. Use a paint brush and it works! Those little slider areas accumulate a lot of dust!

We had dinner and then went out to fill up with fuel at 78.9/litre. Then off to Petrie Island for sunset but the clouds came in so no sunset but we did see these cute little feral pigs.

On our way in to Rockland to get fuel we stopped and took a photo of this barn on the Ottawa River that we've been admiring. 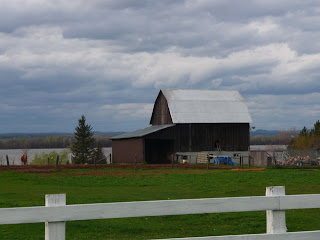 We also stopped at the Rockland Boat Launch and took some cloud photos. 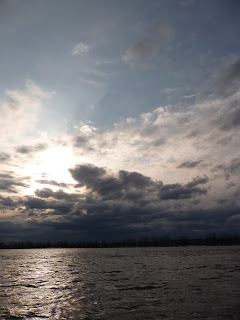 And the cute little pigs that wouldn't get their snouts out of the ground!

This is at Petrie Island where we were walking just the other night. It sure rained a lot last night! 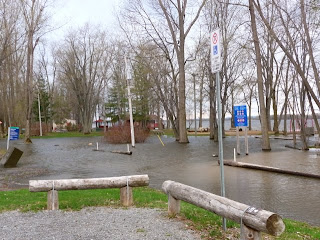