We left Natchez Trace RV Park in Tupelo, MS this morning at 9:55 a.m. We had a couple of incidents of road paving but we weren't stopped long. We did stop a few times at pullouts on our way to take some photos but the most interesting spot we stopped at was Cyprus Swamp which is close to Canton, MS. We walked a ways on the trail there but we’ll go back probably tomorrow. 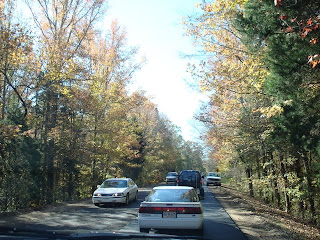 Part of the Old Trace 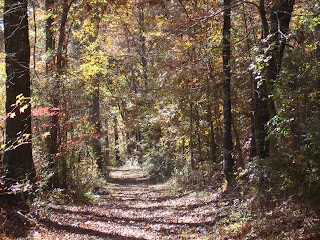 Cypress Swamp - you can see the boardwalk in the background 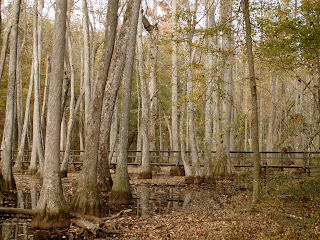 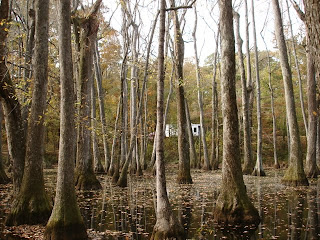 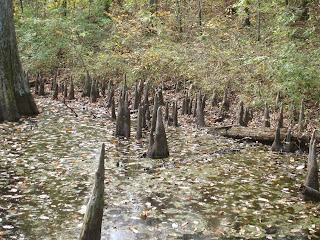 We did see some wildlife today but no photos, they're just too quick. We saw three white-tailed deer romping in the meadow and another one trying to cross the trace. Luckily the guy ahead was watching and slowed to let the deer cross. We also saw some wild turkeys and a little black daschund. Sure hope his owner found him before he got run over!

Right now we’re ensconced at the Movietown RV Park at Canton, MS and we’ve signed up for two days. There is no ‘it’ factor to this campground but the sites are reasonably level and wide. You have to be careful choosing a spot due to all the fire ants around. The lady in the office told me that they don’t try to get into your RV. Sure hope she’s right. I did put some comet around the tires just in case. The first and last time I was bitten by fire ants was in Vicksburg. I don't want to repeat the experience. 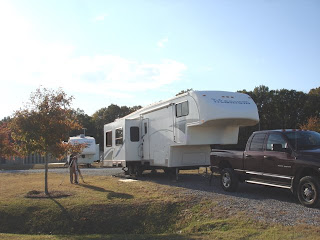 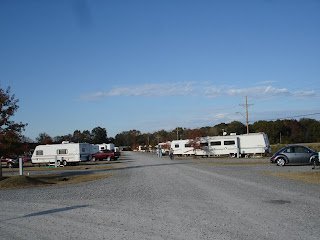 Canton, MS is apparently a site where a few movies have been made, thus the name of the RV park, among them, John Grisham's "A Time to Kill".

There are a few sights to see here other than the Cyprus Swamp so we’ll be looking those up as well. Instead of going to find a Walmart which is about 11 miles away we’ll stop at the Piggly Wiggly in town to pick up some fruit.

Gordon really needs to get some rest. He coughed most of the night last night. We think it’s probably due to the cold weather so it’s warmer here, hope it goes away!
Posted by A couple of newer paintings 2019 at 5:00 pm