It was already 70F (21C) and quite humid when I got up this morning around 7:40 a.m. There was hardly any wind so it felt really warm! I went for my exercise, then had breakfast. We proceeded to pack up somewhere around 9 a.m. We had to move from the spot we were in as people coming from Iowa had that site reserved and they were leaving Iowa today and driving straight through.

Since we decided to extend our stay here we moved over to what the residents call 'the hill' but there's no hill it's just a loop with sites around it. Originally we were supposed to go into site 17. It was a bit tricky backing in to the site as there's a little palm tree right in the middle and you have to back around it. When we got on site we realized that the railing on the deck was going to interfere with our living/dining room slide so Grandpa (the owner) was going to bring his tractor over and move the deck however the people in site 18 left this morning and no one was coming in to that site so we moved to site 18 instead. After setting up I sat out on the deck and read.

The back railing interfered with our slide 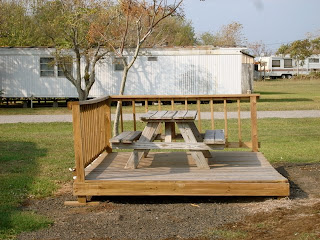 You had to get around the palm tree and not hit the deck or the electric meter (which you can't see because it's behind the palm tree. But it was very narrow! 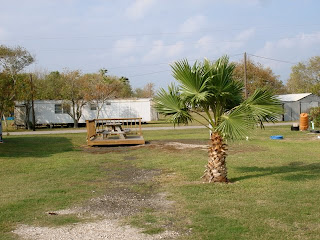 The site where we are now 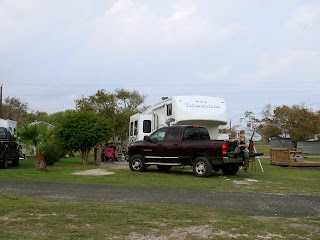 View from the deck 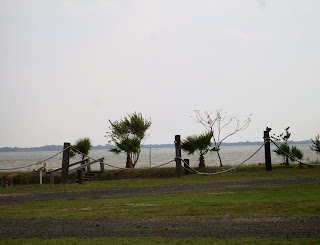 Today was definitely a shorts day!

So we're all set up in 18, everything's working although they did have to replace the 50 amp breaker. We still have a view of the water from the deck. The wind has come up so it's not so humid and we're happy!
Posted by A couple of newer paintings 2019 at 3:20 pm