We had quite a heavy rain for about 45 minutes last evening but this morning dawned bright and sunny with a nice breeze. It knocked out the internet satellite again. The RV park really filled up yesterday and the RVs and tents are packed in just down from us. Our neighbours that we've had now for over a week had gone away but left a tent and their table and chairs so they returned yesterday as well and their site has been busy today! It's noisy here today! There are lots of boats roaring up and down the river. People are taking advantage of the nice weather. 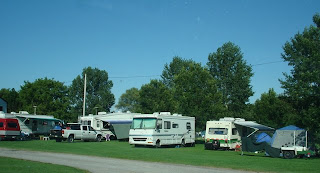 I had a nice walk this morning and after breakfast made my Calico Beans for the corn roast/potluck tonight. I then decided to try to make a necklace by myself and I succeeded! Here's a photo of it. I gave it to my sister as she loves green and black. 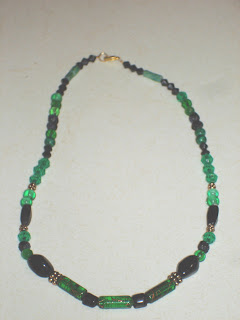 We arrived at the cottage late this afternoon as the corn roast was to start at 6 p.m. The theme was Canada so there was a lot of red and white around and some pretty silly hats! There was lots to eat but unfortunately not all that much that Gordon could eat although he didn't starve. We left pretty early due to lots of smokers and although the band was live, it was loud! We were both ready to leave anyway. When the sun goes down it gets chilly!

This is one of Garth's daughters and her family. 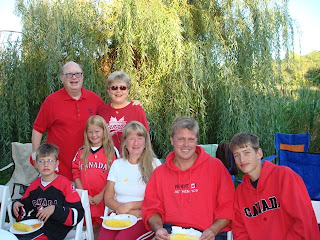 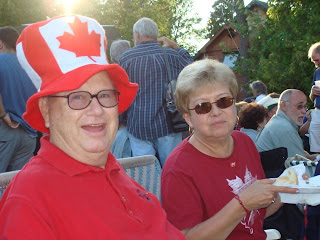 The band and dancers 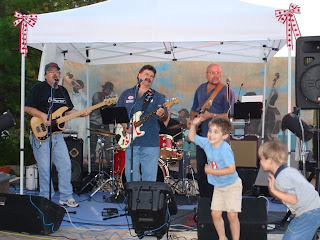