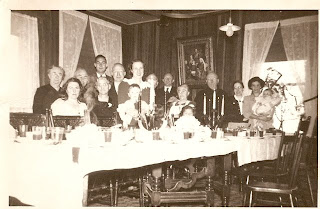 First of all I woke up with a massive headache and a sore jaw which means I must have been grinding my teeth last night. That hasn't happened in quite a while. I also woke up just after midnight with acid reflux which isn't fun and hasn't happened since we had the head of the bed raised last year so I hope that isn't a sign of things to come! Next thing I realized was that it was raining. Yuk! No walk. I really hate that and it was also still humid.

So, after breakfast I did a root touch up. My hair is still really dry from being in the desert so I didn't want to do an all over colour. I had bought a root touch up kit yesterday. It's the first one I've done so the jury's still out on whether I like it or not.

I also got a pork tenderloin browned and put in the crockpot with potatoes, carrots and onion soup mix.

I realized then that it had quite raining so I did a very short walk/run as it was very humid out. My headache had subsided but was not completely gone. When I got back I took a bit of muscle relaxant which made by afternoon go away completely in the form of a nap. 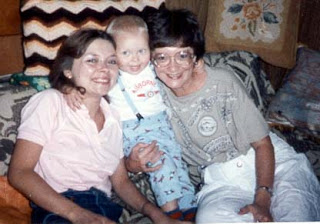 I didn't take any photos today so I've gone through some older photos. The one at the top right is one of the Christmases that we used to have when I was a kid. In fact I am at the head of the table (in my mother's arms) so my guess is that it's Christmas 1948.

The photo on the left is my younger sister, Margie, her son, Nicholas and myself. Nicholas was about two years old in this photo. He's now 23! Boy was I younger and skinnier! The photo was taken at my Mother's house in Morrisburg, Ontario.
Posted by A couple of newer paintings 2019 at 9:40 am