Another Trip to Ottawa

I got an email last night from my sister indicating that we had two parcels that Purolator had delivered. We also had some other errands to run so back to Ottawa we went. We got our errands done and arrived at my sister's house around 1:00 p.m. 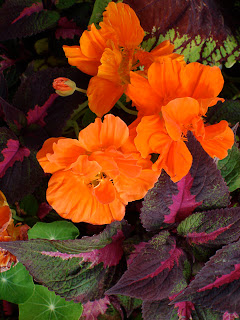 I have an Air Miles card and was told that Air Miles were going to take away the air miles at the end of the year and since after 15 years of belonging, I only had 954 air miles, I decided to use some of the miles for merchandise so I ordered my husband two 1 Gig cards for his camera and they had arrived. I was surprised as I only ordered them about a week ago. That's his early birthday present!

We came straight home and I sat outside and read for a while. It was much cooler today with no humidity at all.

It was sports day today so I watched lawn darts for a while and while I was out I took a photo of these pretty orange flowers in one of the planters.
Posted by A couple of newer paintings 2019 at 8:12 pm