Back to Port Aransas

Here are the photos from yesterday. I think it's a problem with Firefox as I had no problem uploading them in Internet Explorer. 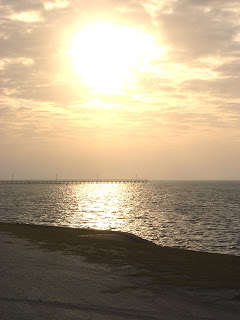 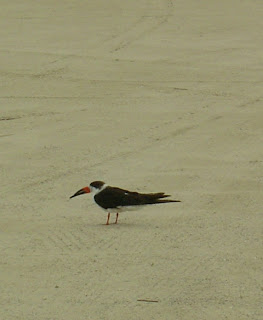 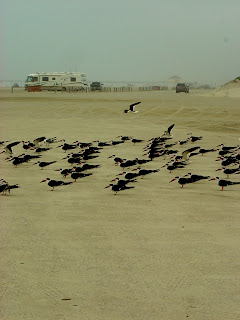 This is a flock of Black Skimmers at Port Aransas Beach 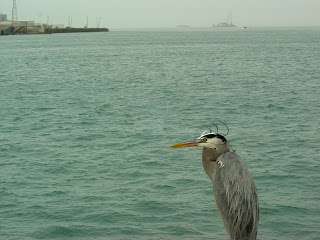 Did you know this was National Lurker week? So those of you that have been lurking are supposed to leave comments. So I look forward to about 100 comments today as that seems to be approximately how many people are coming to my site daily. I thought I might get some comments yesterday asking me why I call our beach but I guess no one is curious!

It was 70F (21C) this morning and partly cloudy as I took my walk along the beach. There wasn’t much going on this morning but the bird club were at the fishing pier with their cameras and binoculars. With my little camera all I could see was the usual little snowy egret and a sandpiper but they seemed to have their eyes and equipment trained far away. I didn’t stick around but continued walking. I saw an license plate on a little Roadtrek and a Titanium from but other than that mostly people from .

We left this morning headed for Port Aransas but on the way checked out some RV Parks. There is one very near here that the price is right but doesn’t have many other redeeming qualities at least for a month’s stay. We saw another one in Rockport that was nice and on the water but had no room until March so we’ll keep looking.

As we were both hungry we stopped at Fins in Port Aransas again. I was thinking I’d have another bowl of seafood gumbo but he only makes it when it’s cold so I wound up with an oyster and shrimp po’ boy which is a hoagie. It was good but I really wanted seafood gumbo! Then we stopped at Marina Beach to pick up the mail that my sister had sent me and hadn’t arrived when we left so now I have some photos of Christmas. Then we did our usual rounds of the south jetty, the beach and before heading home.

We had some shower squalls on and off all day but reached a temperature of 75F (24C) when we were coming through Just after we got home it started to rain and thunder.

When we got back this afternoon there was a note taped to the door inviting us to a presentation at the rec hall on the Aransas Bay Estuary System. We decided to go just for something different to do. There was quite a turnout but the chairs were uncomfortable and the guy wasn’t a great speaker but it was better than watching a rerun of Law & Order!