Our First Day in Port Aransas 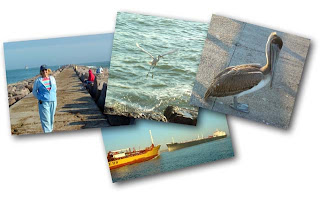 Photos from l to r: Me on the jetty; an egret in flight; a handsome little pelican on the fishing pier in town; ships passing in the channel

This morning was very foggy but this afternoon turned out to be sunny and nice reaching about 75F (24C). Gordon went out and took some photos at this morning in the fog.

Today we spent most of the day just settling in, getting to know the park. A couple that are here from , and used to live in dropped by, then we met them again this afternoon on the jetty. There are quite a few RVs here from . I expect we will meet more of them in the days to come.

The jetty divides the channel where the ships go through to get to the from the Gulf and it goes quite a ways out into the water. We didn’t walk all the way to the end but there were lots of people and birds out there. Also there is lots of beach, but you have to drive to get to it.

We got some groceries and then stopped at one of the fishing piers in town. From there you can see the lighthouse although it is far away. Something tells me we’ll be taking a boat cruise to see it and the dolphins. There are lots of dolphins in the channel and they like to jump in front of the ships as they are passing by.