A Day's Outing with Betty and Garth 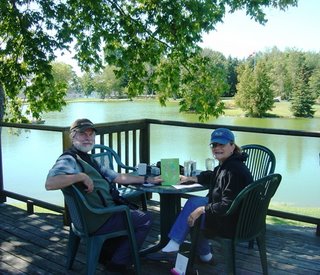 This is the card that Betty & Garth gave us for our anniversary and our photo. 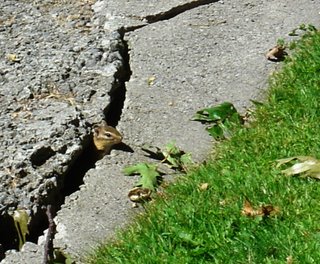 See the little chipmunk peeking out from the crack in the sidewalk? There were at least two of them that appeared to be living in that crack. 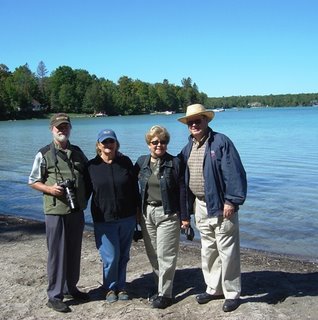 Gordon, Sandra, Betty & Garth with Sandy Lake in the background
Today was partly cloudy and cool 13C (55F) when I went out for my walk. The plan today was to go to the cottage and take a boat ride over to Catalina Bay Resort where they have a restaurant called Crocodile Bill’s for lunch. It’s located on Big Bald Lake which meant we would have to go through the locks at Bobcaygeon.

Since it was quite cool this morning we dressed in layers and headed for the cottage. Sturgeon Lake however had other ideas for our day as it was quite choppy. Sturgeon is quite a large lake and is often quite choppy which meant that the chances of us getting wet were very good. Before we arrived Betty and Garth had decided that we would not go by boat but would take a road trip. Bummer! Oh well, another day for the boat! Too bad we were dressed for boating!

We headed out and stopped at a couple of restaurants in Buckhorn to see if they could accommodate Gordon’s diet. One looked promising but it wasn’t on the lake. We headed toward Sandy Lake, a pretty glacial lake about 5 miles from Buckhorn and on the way back stopped at a place called Six Foot Bay. Garth had played golf here at one time. It’s a pretty area, has large cottages on the water and an RV park as well as a restaurant which had a huge plate of nachos that Gordon could eat. The food was very good and Betty paid for our anniversary (which is November 5th but we will be somewhere on our way south by then).

We then headed to Curve Lake which is on an Indian Reserve. They have a Pow Wow every year in September so we drove to the area where they have the Pow Wow and it looked like they were participating in a mini Indian Ceremony for CHEX 5:30 News as they were there with cameras. We took a few photos before someone told us we couldn’t take photos of an Indian Ceremony. It was quite interesting watching them do their dance. We then stopped at the Whetung Ojibwa Crafts and Art Gallery. I bought a couple of little bracelets there but there were some really pretty Indian blankets and lots of art and jewelry of all kinds as well as moccasins and all sorts of gifts. From there we went to Young’s Point, a little town on Clear Lake. Lock 27 is at Young’s Point so we walked across the lock and around the little town area a bit and then came back and looked in their Trading Post while Betty and Garth had some Kawartha ice cream. After the huge lunch we had I can’t imagine where they put it! They sell everything there from clothing to furniture to stuffed lifelike looking cats. Nothing called to me however so I managed to escape without buying anything.

From there we headed back to the cottage where we took our leave of Betty and Garth and headed home, both of us very tired again!
Posted by A couple of newer paintings 2019 at 7:09 pm