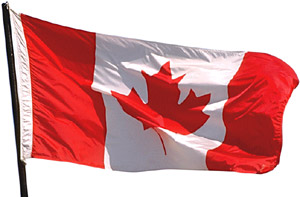 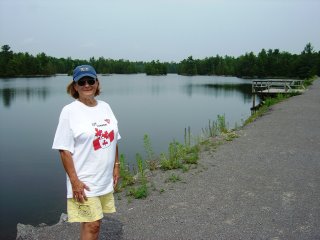 Here I am at Morris Island Conservation Area on the Causeway

This is the first time I’ve seen this campground full since we arrived here nearly a month ago. This morning when I walked there were five RVs lined up in the driveway. I guess they didn’t have room for them last night so let them park there overnight.

We had to dump the tanks again today so again had to pack up, go dump and put everything back together again, another two hours. We’re leaving Tuesday to go to Upper Canada Campground. Too bad it couldn’t have waited but our black tank has shown full on the gauge for the last two days.

I was sitting outside reading when Gordon came out and said he was trying to decide if he was going to the fireworks tonight or not. Then he thought he’d like to go and have a look at the Morris Island Conservation Area at Fitzroy Harbour. We left poor little Bib behind as I didn’t think he would be allowed at a Conservation Area but there was someone there walking their dog. It would be nice if they let you know on their websites if dogs are allowed or not. We walked a short way on the causeway and saw lots of dragonflies and wildflowers. It’s a very pretty area. While we were out in that part of the county, we drove through places I hadn’t been before like Galetta, MacDonald’s Corners, Kilmaurs and Dirleton. I had never heard of Dirleton or Kilmaurs. Mind you, as towns go there’s not much to them. MacDonald’s Corners is a pretty little place, kind of like a small Constance Bay. We drove to the ferry at Fitzroy as I hadn’t been there before but didn’t go on it. We arrived home about 4:45 p.m. to a hungry, happy little dog.

With the campground full it means lots of kids. Consequently Bib doesn’t want to go outside. He doesn’t like kids, bicycles and bouncing balls and there’s a lot of that going around this weekend.

Tonight we’ve decided to stay at home. We’ve been having sprinkles of rain on and off so home is the best place to be!
Posted by A couple of newer paintings 2019 at 8:08 pm