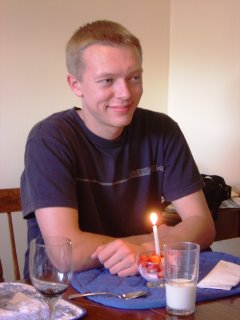 Mel and Janice left this morning about 8:30 a.m. to head to the Lake George, NY area.

Later this morning I called my sister’s place to see what they were up to. I had forgotten to pick up my mail when I was there yesterday and there was a letter from the medical insurance people about my claim from when I was in the hospital in the U.S. I asked her to open the letter to see what it said but it didn’t make much sense to her so I told her I’d stop by today to pick up the mail.

I also wanted to get something so that it would be easier to hook up our hose for flushing our black water tank. Trying to hook up a hose at some of the dump sites is an exercise in futility. You often wind up with skinned knuckles from the handle of the tap being so close to the tap as is the case here at Ottawa Municipal. I went to the Canadian Tire in Bells Corners and as I drove into the parking lot I saw an SUV with a Jay Feather trailer attached. Hmmm, Mel and Janice’s rig looks just like that one. So I got out of the truck and went to look and it did have Ohio plates so I went in to the Service Department and there they were. The had a flat tire just as they were getting onto the Hwy 417 ramp at Moodie Drive so not far from the campground. Their Good Sam Emergency Road Service had come and changed the tire and then showed them the way to Canadian Tire to see if their tire could be repaired. There Service tech said it could be repaired so I waited with them and saw them off on their way to Lake George again.

I didn’t get anything for our tap problem thinking that our two way faucet attachment might work.

Continued on to my sister’s, checked out the letter and it didn’t make much sense to me either but they did enclose a cheque for me to pay for the prescription I got. I called them but had to leave a message for them to call me back tomorrow. I stayed and chatted for a while and we were invited to come back for dinner. So, I left and went to a couple of stores on Merivale Road looking for a dress for my nephew’s wedding on July 28th but didn’t find anything so came home.

Today is my nephew and godson’s 21st birthday so dinner at his parent’s house was in honour of Nick’s birthday. Photo above is of Nick with the candle in his ice cream. He didn’t want a cake. It was a nice family get together as my sister, Betty from Toronto was down and Becky, Nick's fiancee was there as well. We were only missing Betty's husband, Garth.
Posted by A couple of newer paintings 2019 at 9:20 pm