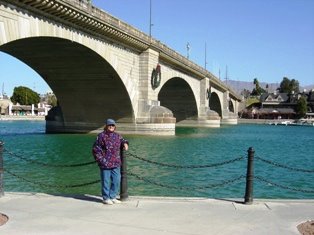 But it is under construction. Looks like they are about to repave it.

We left the campground this morning at about 9:15 a.m. and made one stop at the Parker Dam on our way to Lake Havasu City. Lake Havasu City is home to the real London Bridge which was purchased from England in 1968, disassembled in London and reassembled in Lake Havasu. The bridge was reassembled on dry land and the Bridgewater Channel was dug out from beneath the bridge causing the peninsula to become an island. There is a lot more to the history of the move of the bridge but I won’t bore you with further details.

Other than London Bridge, there’s not much more to Lake Havasu however I did go grocery shopping as Quartzsite is very busy and I’m told expensive for groceries. We also went to Home Depot and got a very tiny shop vac. We need something to be able to keep the truck clean and thought a shop vac might come in handy. It’s very cute but has lots of suction!

On our way home we stopped at all the scenic lookouts to take photos and arrived home around 6:00 p.m. in time to get dinner ready.

So now we are settled down to a night of interneting and TV watching.

The photo today is of me at London Bridge. I have on a T-shirt, a cardigan, my jean jacket as well as my fleece jacket. It’s not that it was that cold, but very windy. It was about 59F at the time the photo was taken.
Posted by A couple of newer paintings 2019 at 9:54 pm