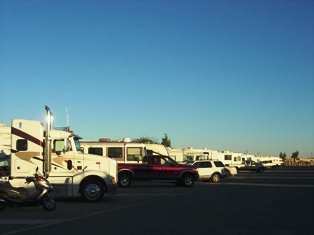 Today I thought I'd like to check out the Yuma Malls so I took off around 10:30 a.m. and headed west. There is a shopping area off SR 95 North. I went to Target, Kohl's, Marshalls, Ross and then thought I'd check out what I thought was a big mall with a JC Penney and Dillards however I found out it was an outdoor mall and those were really the only two stores there. There were a couple of jewelry stores and a Lenscrafters also only accessible from outside. Didn't find much I liked better than my money so headed into town and stopped at another mall that looks as if it's about ready to close. Again it was an outdoor mall so only went to Mervyns. By then it was nearly 3:00 p.m. so headed back to the RV.

Today was cooler and windy. Gordon put an extra strap on the internet satellite just to be sure that the wind wouldn't take it away. It was still sunny though and the wind has died down now. It was nothing like the windy day we had in Twentynine Palms.

I called a vet today to see if I could get Bib's dogfood and they had to order it so it is to be in tomorrow so we'll have to pick that up. Other than that and Gordon going to photograph the old jail, we'll just be getting ready to move on to Quartzsite on Wednesday. At that point we may be out of commission for a couple of days as we won't have an electricity.

The photo today is of the aisle of the park that we are in. More and more fifth wheels are being towed by semis. The one here is a Peterbilt. There is a sign on them indicating they are for recreational use only. There are also a lot of Ford F550 and 650s. The fifth wheels are just getting heavier and heavier.
Posted by A couple of newer paintings 2019 at 9:26 pm