Sunday was a busy day. First thing we went back to the Flea Market. We only bought one more frame but it has a limited edition print in it, don't like the print much though.

When we got back I headed to the Mall as there was some stuff on sale only for the weekend that I wanted. While there I picked up some groceries. Gordon called and said my sister and her husband wanted to come to see us this afternoon so I firmed up times with her and bought groceries so they could stay for dinner. I usually only buy for the two of us so if someone drops in, they don't get fed!

Right after lunch we headed over to the RV to mow the grass. The mower wasn't available so Gordon had bought the weed eater just in case. While there we loaded up the truck with more stuff. It's amazing how much that place holds!

On our return, Gordon started putting the swing together and got it done before he had to start the barbecue to cook the pork chops I had purchased.

John put the timer on our bathroom light so now we don't have to worry about turning the light off, it turns off by itself. His plan is to run another wire from the attic to put in separate switches but he has to bring his HAZMAT gear to do that.

I put together a dinner of pork chops, corn on the cob and rice with peaches, strawberries and blueberries for desert.

Then it was time for Lost. It was an interesting finale. I'm kind of bummed that they died but I guess it was a fitting end. I stayed up to watch a bit of Jimmy Kimmel as he had some of the Lost stars on. I don't do well staying up after midnight so I didn't watch most of it but noticed that Matthew Fox who played Jack was on drugs. His eyes lit up like a Christmas tree! 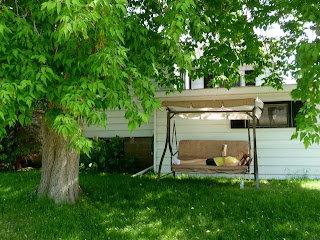 Today I slept in till after 9 a.m. but have been lethargic all day so didn't do the planned run to the RV. I planted myself on the swing for most of the day. It sure was nice out there under the tree listening to the traffic and the trains. Too bad the motorcycles are so loud going by, that was the only bad part.

Gordon went out for a while and toured the Heritage House Museum which is just down the road from us. He knows that I'm not much interested in history so he went by himself.

It's been warm today with a nice breeze. Gordon said the temperature was 28C (82F) when he was out in the truck.
Posted by A couple of newer paintings 2019 at 4:00 pm