Today the plan was for the ladies to meet downtown to go for lunch.

Just as I was getting ready I got a phone call from my niece saying her Mom had just been taken to the hospital by ambulance as she had passed out and hit her head on the bathtub.

Plans were canceled and others put in place as the day went on.

After getting the phone call I decided I needed to get out for my walk. It was a beautiful day at 2C (36F).

Betty and Garth came out to Nancy's. Danica took the car over to the hospital so her Dad would have a way to get home as he had gone in the ambulance. Then Becky (Nick's wife) picked Danica and Nick up at the hospital and dropped Danica at home. Betty and I then went and picked Danica up and brought her to Nancy's along with the lasagne and caesar salad they had made. So the potluck that we had planned for my sister's was moved to Nancy's where we're living.

Here we are having finished eating - left to right - Gordon, Me, Betty, Danica-Garth took the photo 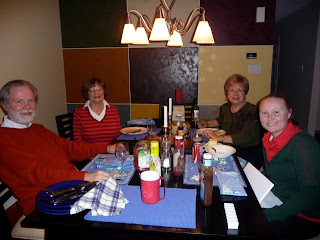 This photo has Garth in it and I took the photo 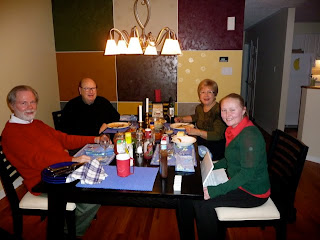 Nancy was going to her cousin's for dinner tonight so she didn't get to partake of our feast.

In the midst of all this, Margie was able to come home. She had been dehydrated and had some kind of bug in her system that was attacking her but she seems ok now so thanks again for all your prayers. There are so much appreciated.
Posted by A couple of newer paintings 2019 at 8:17 pm