Before I start on today I just want to comment on what a nice park Council Road RV Park is. The wifi is great and fast! One of the owners, Sam, who directed us into our campsite yesterday came over to say goodbye and chat for a while. He is really into customer satisfaction! I would highly recommend this park!

On to today. We left a little later today as the RV park has no stop light at the street which gets you onto the freeway so we waited until rush hour was over and left at about 9:10 a.m. It was 54F and sunny. I even had time for a brief walk this morning and a bit of a run. We had a brief traffic back up in Tulsa where they narrowed three lanes down to one lane for a bit but we weren't stopped for long, thank goodness.

After two on the road breaks we arrived at Joplin, Missouri KOA at about 1:00 p.m. We stayed here on our way west in the Fall. They have redone most of the sites with new gravel over the winter and unfortunately where the gravel meets the grass there's a bit of a lip so of course I turned over on my foot that had been feeling a lot better lately so hopefully I didn't do too much damage to it AGAIN!

Here are some 'around the park' photos.

This is our RV with the slides in. 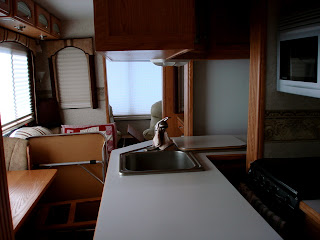 Here are a few photos that I took along the route today. 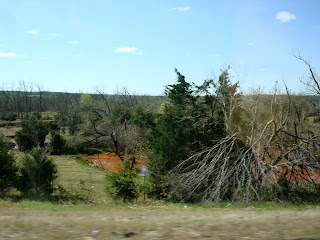 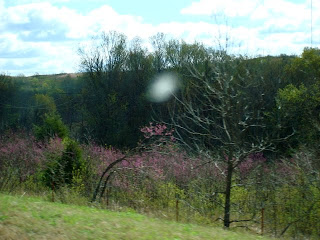 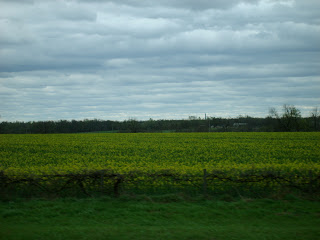 Did we make a wrong turn and wind up in Kentucky? 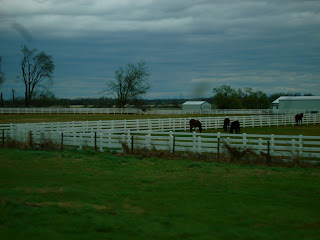 Lots of green along the way (for Jenny).


After we got set up, again it took only about 1/2 hour as they have free wifi (no satellite setup) at all sites here as well, we stopped at the local Walmart to pick up a few items then back home to get warm! It's quite windy here and we picked up cloudy skies as we were leaving Tulsa, OK. It looks like we might be traveling in some rain tomorrow.

There is quite a bit of flooding in the low lying areas around here but it's not all over the place the way the news would have you believe. The photo on the left was taken along I-44 and the one on the right, here in Joplin.


Our tail wind wasn't as good today so we only got 12.7 mpg for today's trip but that isn't half bad. In fact we had cross winds for a lot of the way.
Posted by A couple of newer paintings 2019 at 4:12 pm