A Low Key Day and a Barbecue 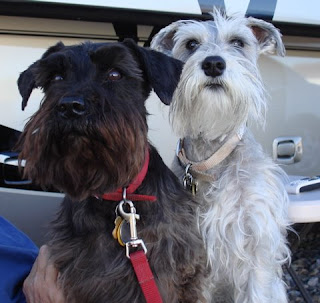 First of all I want to thank all the people on rv-dreams chat for their prayers and good wishes for Gordon's speedy recovery. I especially want to thank Ellie and Jim for being there for us and for offering to be of assistance to us in any way. We appreciate it more than words can say.

Today we spent a quiet day. Jim stopped by this morning to see if we needed anything and Ellie came over around noon to invite me over for a barbecue.

I spent the day reading and making a few bracelets.

Around 4:15 p.m. or so I went over as I saw Jim slaving away at the barbecue and sat outside and talked with them and took this photo of Jasmine and Mr. Bo Jangles. Ellie's sister, her husband and cousin arrived shortly after and we had a wonderful dinner of chicken, broccoli, fruit salad with apple pie and cool whip for desert. It's the best meal I've had in a while as we've only been eating salad since Gordon hasn't felt like eating much. I even got a care package to bring home to Gordon.

Gordon had a pretty good day today but has a definite reaction to the antibiotic that he's taken so he called his daughter who is a pharmacist although staying at home being a Mom right now and she didn't think he should continue taking it so I called the pharmacy who suggested I call the ER Doctor. The doctor who saw Gordon on Monday night wasn't on duty so I was told he would have to come in or else have the pharmacy call them. So I called the pharmacy again and they are to call Emergency and call me back so that's what I'm waiting for right now. Nothing's easy!

The pharmacy called back and they couldn't get anyone to authorize another prescription at the hospital, the hospital wants us to go back in.

So I called the insurance and she said to go ahead to the hospital but to let them know if they want to do more tests. She also gave me some walk in clinic information in the area.

I talked to Gordon about it and he had already taken his antihistamine cough syrup and the rash has gone again so we're going to wait till tomorrow to do anything.

Why is this so difficult? All we want is a replacement prescription that won't make him break out in a rash!
Posted by A couple of newer paintings 2019 at 12:18 pm