This morning was 20C (68F) with hazy sun. The sky looked like we would have rain today and indeed we did! I walked my two miles and all I saw were a couple of goldfinches sitting on the electrical wire. I mentioned a couple of weeks ago that I had seen what I thought was a wolf in the ditch on my walk. When we were at Murphys Point Visitor Centre the other day, I saw a stuffed animal that might have been what I had seen on my walk – a fisher! It had the same little face and although I didn’t see the body really well, I think that’s what it was. I borrowed this photo from the internet.

I had decided yesterday that I was going in to Almonte to look around and get some groceries. Gordon decided this morning that he would go with me. So while I looked around the shops in the main shopping area he was off taking photos. I looked in almost all of the stores but didn’t find anything I wanted to buy. I might also mention that Almonte is where James Naismith, the inventor of basketball is from. 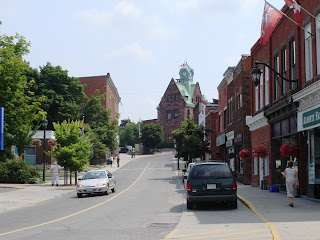 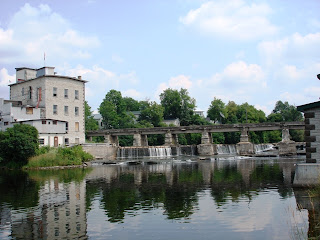 We met up for lunch at the Iron Works Pub on Little Bridge Street. They have a nice patio and we’ve walked by there before but had never eaten there. Gordon had a really good burger and I had a taco salad. Both were excellent! 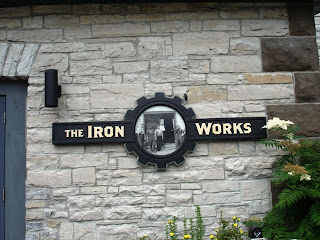 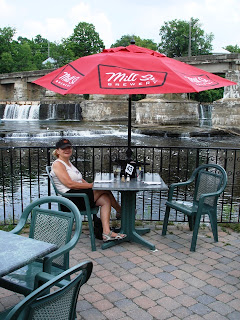 After we finished there we drove around town for a bit and stopped at the library then on to The Bargain Shop which has just opened recently. While I was there Gordon drove home as a storm was threatening and all the computers were still hooked up. So I walked across the street to the grocery store and he drove in just as I was going through the cash. From there, Gordon came home and I then went back to to finish grocery shopping. I had some heavy rain on my way in to , then it stopped long enough for me to get into the store but it was raining quite hard when I came out so I managed to get a little wet.

We’ve had a couple of power outages and as I’m writing this we have more rumblings of thunder. Apparently we’re under a severe thunder storm watch but that’s from and we don’t always get the same weather they do.