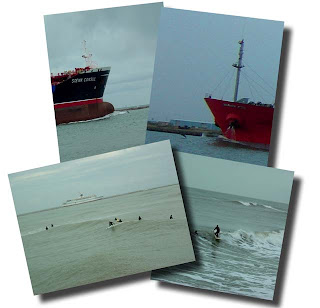 If you look closely at the two photos at the top you will see a dolphin jumping in front of the ship (double-click on the photos). The two bottom photos are of the surfers at the beach this morning.

It was quite a bit cooler this morning – 56F (13C) , cloudy with a dark sky looking like rain so I set out to walk around town.

This morning we went out to see if we could find something worth photographing in the cloudy weather. We wound up going to the south jetty. A ship was just going by with more dolphins jumping in front of it. There were also surfers out en masse. Pretty good surfing waves today! After that we stopped for fuel, the first time since December 5th then on to where Gordon photographed the herons. I was able to keep myself from taking more pictures of herons but probably just for today. Then as we were both hungry, we stopped at a little Mexican restaurant in a strip mall that’s very close to us called ‘’. There was a lot of food and it was pretty good. After that I decided I needed to walk so set out to take in three of the shops that are near the RV park. Didn’t buy anything. I had picked up some postcards but no one wanted to wait on me so I left them and left the store!

I had a long nap this afternoon and Gordon went out and took photos of a beautiful sunset. Check out his photos here.