This morning when I woke up, Gordon had turned off the water as it got to -2C (29F) overnight. Lots of frost on the ground this morning but was bright and sunny. It was 1C (34F) when I ventured out for my walk.

Since it was such a pretty Fall day, we decided to go back to Jacques Cartier National Park that we had tried to go to last Saturday but it had too much traffic trying to get in. We were pleasantly surprised to find out that today was FREE! We stopped at the Interpretative Centre but didn’t stay there long preferring to continue along and take some photographs. The road was paved but narrow beyond the Interpretative Centre for a few kilometers then after we crossed an old bridge it became a dirt road and with the air that we have to have in our tires for towing it was also very bumpy. Anyway we went into the park to the 18 km. mark, taking photos along the way. It is a very pretty park but has the usual problems for photographers – too many trees and plants in the way and nowhere to pull over to take the shots you want.

Photos in the Park 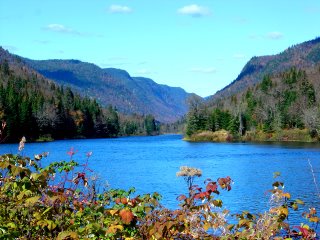 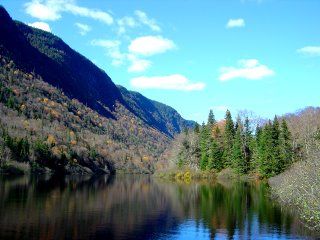 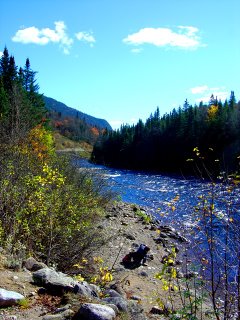 By the time we headed for home, this being the Friday of a long weekend, traffic had started to back up and it took us over ½ hour to get across the bridge to the south side where we are parked. The photo below was taken out the windshield on our way south on Hwy 73.